She Loves Me Integrated Student Campaign 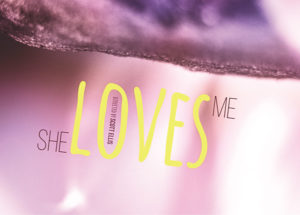 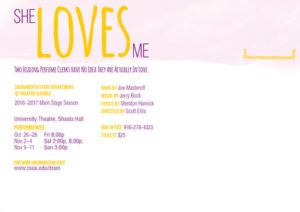 A student postcard and animation campaign to advertise the theater department's upcoming production of "She Loves Me." The requirements were to create a system through the use of type and image.The photographs had to be taken by the students and they had to be abstract in nature. The goal was to instill a sense of meaning about some aspect(s) of the play such as tone or story without the audience being able to exactly identify the subject matter of the image.

I began by crumpling and  tearing up different pieces of paper and other substrates to create different textures that I then lit with various lights (including small LED lights). I then used a macro lens to photograph them. Next, I chose an image that I thought could work well for the piece as there was something almost soft in the way the paper looked, almost like the petal of a flower. So I began to experiment with different colors that I felt carried the themes of the play: love, passion, mistaken identity, humor.
When it came time to create a type treatment for the postcards, I knew I wanted to emphasize the whimsy and comedy of the play. It is a bright, funny, romantic musical. I wanted there to be a feeling of humor but also one of unease, as if things were topsy turvy. So I started rotating the text around and used photographic elements to underline or emphasize the text. This proved very effective at telling the story without using images or lines from the play.

To create an integrated campaign, I crafted an animated advertisement which further reveals the tumultuous plot that develops throughout the play. I took the idea of "she loves me, she loves me not," and tore up a large number of pieces of paper and then lit them with bright violet and green colors that were in some of the postcards. I then filmed myself dropping these pieces of paper, first slowly and then more vigorously. I recorded different takes and then overlayed them in After Effects. I also used a subtle 3D camera movement to simulate a dolly shot. As the paper falls, the camera slowly rotates and pans in until finally the title and play dates are revealed.
I wanted the chaotic and tumultuous nature of the play to come through in the music so I plunked out a rhythmic piece on my keyboard, which starts becoming almost cacophonous but finally resolves in the end as the title emerges at the end of the animation.