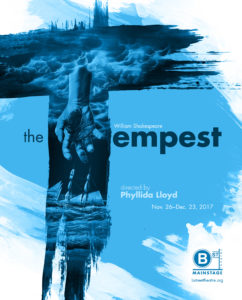 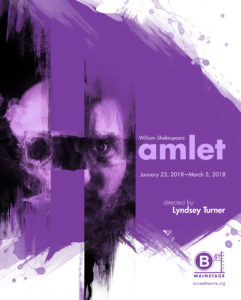 Design and create three posters for an imaginary season of the B Street Theater in Sacramento. Pick four from the following: Hamlet, The Tempest, Macbeth, A Midsummer Night's Dream, Romeo & Juliet. Each poster must be able to stand on its own but must also have a clear system that links them all together.

From the very start of the project, I knew I wanted each poster to be monochrome - each would feature a very bold color that was linked to the theme or subject matter of the play. The next part was coming up with my system, something I could replicate throughout each of the four posters (note, as of writing this, the 4th has yet to be completed). I started thumbnails of various ideas. From the beginning I kept seeing bold brush strokes in the design, so I ran with this idea. As I continued to sketch out tiny thumbnails, I hit upon the idea of drawing iconic imagery within the first letter of the title of the play.
I started with the Hamlet poster. I took a photo of my face to represent Hamlet (hey, why not) and then combined a few photos of skulls to represent Yorrick, or more thematically, the idea of life vs. death, choice vs. inertia, which are constant themes throughout the play.
I had a difficult time getting the word "Hamlet" to read as Hamlet and not "amlet." This poster was the experiment and my second poster, The Tempest, was much more refined.
Again, I used a photograph of myself (my hand) along with photos of the ocean I had taken while at Mendocino and photoshop brushes of water and cloudy skies. I then used those to draw over to create the scratchboard effect. This poster came together much more quickly and demonstrates my system most successfully.
Macbeth was a difficult poster to create (which makes sense, considering the subject matter of the play). I knew that I wanted to use the color red (it is one of Shakespeare's bloodiest plays after all) but struggled to come up with a compelling image to use within the letter "M." So, more photographs of hands (this time my wife's) and an image of a crown, along with drawings of blood dripping from the crown. The end result is gruesome and macabre and fits the tone of the play very well.
The last poster, Romeo & Juliet, takes a slightly different approach. Instead of the 1st letter of the title being the focal point, I instead used a plus sign for "and" and used this as a bladed wedge between the two lovers.